The Food of the Peruvian Amazon’s MV Aqua Riverboat

Peru’s culinary boom has spread to more remote parts of the country and more Amazonian chefs are returning from cooking schools and high-end restaurants in Lima tot heir birthplace. Iquitos is the natural choice for the center of the Amazon’s new culinary boom: it has gone through several major booms and busts in the past century (rubber, oil, drug trade) where great wealth has come and gone that it is one of the Amazon’s more cosmopolitan cities. Pedro Miguel Schiaffino of Lima’s Malabar, one of the city’s great chefs and one of two South American chefs known for their explorations of Amazonian cuisine (Alex Atala in São Paulo is the other) has been actively involved in pushing local producers to produce premium products and encourage local chefs to look deeper. One of his most enticing creations is the gourmet Amazonian menu served on the MV Aqua riverboat.

The Aqua’s menu, and that of forthcoming sister ship the Aria, is unlike any other cruise ship menu you will ever encounter. While picky North American eaters and vegetarians will find alternatives in the dining room, the food is comprised primarily locally sourced ingredients that are given a contemporary make over. Schiaffino’s menu is the culmination of several years of research in Amazonian ingredients and includes nightly four-course dinners with dishes such as Cream of Brazil Nut Soup, Doncella (a type of Amazonian catfish) carpaccio, Dorado (golden catfish) in a cashew nut crust, yucca beignets with aguaje ice cream, and Camu Camu Tarts. Many of the dishes are inspired from Schiaffino’s Malabar in Lima and wines such as Luigi Bosca Reserva Shiraz and Escorihuela Viognier are served accompanying the dishes.

While the main purpose of the MV Aqua is to bring tourists face to face with the people and wildlife of the Amazon rainforest on the ship’s route through the unspoiled Pacaya Samiria National Reserve, many guests unexpectedly take away an even greater understanding of the region through its food. The region is constantly under attack from oil companies, logging, cattle farms, drug traders, and a dozen other threats that have shrunk the forest by earth threatening proportions in a matter of years. There is an effort to preserve the region through sustainable practices, of which tourism and food are major components. While few tourists walk away after seeing a giant river otter unamazed and unmotivated to do what they can to help these wonderful creatures, they rarely have the chance to fall in love with vitamin C rich camu camu fruit or the meat of the paiche fish. Having tasted these flavors like these aboard the Aqua, they are now more likely to help support Amazonian sustainable farming and aquaculture projects whose products are beginning to trickle into the United States. The biggest help of all to the rainforest may end up being a trip to the supper market.

To arrange a voyage on the MV Aqua or MV Aria, visit www.aquaexpedtions.com.

To read more about my trip on the Aqua, click here and here. 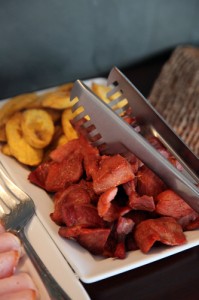