Only an hour from the 24/7 buzz of Rio de Janeiro is a tranquil retreat, where you can slow down and breath fresh mountain air, as well as savor slow food prepared with loving care.

In the introduction to A Cozinha da Alcobaça, author and chef Dona Laura Góes says the food served in her pousada in Rio de Janeiro state, is based on “refined simplicity.” The Pousada da Alcobaça is a pretty and cozy 1914 colonial-style mansion, with 11 individually decorated rooms, set in lush tropical gardens sloping down to a sparkling river. It lies near the historic imperial city of Petrópolis in the heart of the Vale des Gourmets, a region renowned for its fine restaurants and fertile farmlands. “This means that we have to be totally rigorous with the quality of our ingredients; with the combination of flavors and textures, and even the cooking times,” Dona Laura explains. True to her word, she hand picks her vegetables from the adjacent fruit and vegetable nursery, and sources the majority of the meats and fish from local producers. (SEE her recipe for Camaroes a Baiana here)

After his recent visit to Brazil, UK travel writer Huw Hennessy asked Dona Laura about her culinary upbringing and discovered surprising roots in Betty Crocker, infused with a typically Brazilian love of hospitality. 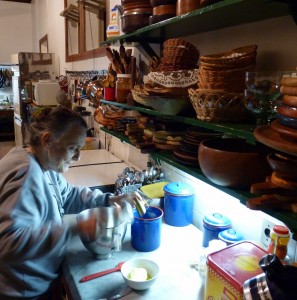 HH: When did you learn to cook?
LG: I started cooking as soon as I had my own kitchen, which was in the 1950s, after I married, in Houghton, Michigan.

HH: Who taught you to cook?
LG: To start with I used recipes that neighbors gave me; then I got hold of the Picture Cook Book, (the classic 1950 American household recipe book) by Betty Crocker. I learned a lot from that book, which has detailed instructions, all with photographs. It came as a shock to me when I found out that Betty Crocker did not even exist! It was only later on that I became more confident and was able to imitate what I had observed in others, having watched my mother and grandmother cooking when I was a child.

HH: What was the first dish you ever cooked?
LG: The first tasty dish was a trout from Lake Superior. That was when I learned that you cannot substitute butter with margarine, which was common practice in the US.

HH: When did you decide to take up cooking seriously, and why?
LG: It was only when we opened the Pousada da Alcobaca, with its restaurant, that I thought of becoming a professional cook. Before then I was a teacher and only cooked for the family.

HH: Is there such a thing as a Brazilian national dish?
LG: In a country as big as this, with its huge climatic range, it’s difficult to pinpoint a common denominator. But perhaps it would be feijoada (a hearty stew, served with beans, rice, farofa – fried manioc flour –  and other assorted side dishes), as you can find that everywhere. Also, variations of farofa, and other manioc flour dishes are served all over Brazil, 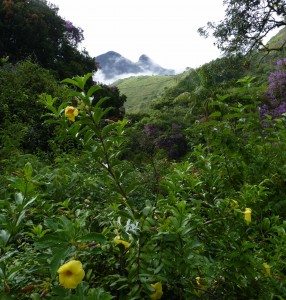 HH: How would you describe the cuisine at the Pousada da Alcobaça, or is it always changing?
LG: I try to keep the food simple and at the same time sophisticated; reviving certain old recipes. We cook many dishes on a wood-burning stove, but we also have gas and electric ovens, as well as two indispensable microwave ovens. I sometimes add things to the menu, but they don’t let me change anything.

HH: What is your favorite dish?
LG: I particularly like seafood, fish and prawns, but as we are about 80km (50 miles) from the coast, we don’t serve these that frequently.

HH: Which chef do you most admire in the world?
LG: I admire many chefs. I often watch Nigella Lawson and Jamie Oliver on TV, and I never miss Nina Horta’s stories (renowned Brazilian cook and food writer). I learned a huge amount from Julia Child, who I consider my great inspiration.

HH: Is there anything you have never eaten but would like to try?
LG: I’d like to taste truffles from Italy or France, to find out if they’re better than Brazilian truffles (extremely rare and expensive).

HH: Any food you hate and will not eat?
LG: I tried snails once, but would not like to repeat the experience. I don’t like milk. Rice pudding, a popular dish in Portugal, and common in Brazil, is never served in my house.

HH: Has Brazilian cuisine changed much since you learned to cook?
LG: Cookery fashions do really exist. Foams, inspired by Adriá, have been the craze for a while, but they’re going out of style. I try to avoid these sort of fads.

HH: People today don’t have time to cook, do they?
LG: I believe that is probably true for most people, but not for us. We aim to produce what you could call “slow food.”

HH: Should it be the responsibility of parents to teach their children to cook, or the schools, or both? Is it important for children to like cooking?
LG: I don’t believe that this learning should be part of the school curriculum, nor that parents should formally teach cooking. There are things that children can learn by watching adults as I did. For some families it is very important to serve good food, as it always was for my family, but not everyone is like that. Children should learn to eat well at home, to have a healthy diet.

HH: Is cooking just a practical activity for you, or does it have a spiritual quality too?
LG: Cooking is a job, like other jobs, but it is also an act of generosity. Whoever likes cooking likes pleasing people, and takes pleasure from the pleasure it brings.

HH: We have quite a few Mexican and Argentinian restaurants in the UK, but not many from Brazil. Why do you think this might be?
LG: Perhaps it’s because of the range of cuisine we have in Brazil. There are big differences between a ‘churrascaria gaucha’ cowboy-style steakhouse (from the south) and a restaurant in Bahia or Para (in northern Brazil). When we were traveling in France, though, in the Provence town of Apt, we came across a restaurant specializing in the cuisine from northeastern Brazil. They served an excellent fish in coconut and dende (palm oil) sauce.

HH: Do you have any future plans for the restaurant?
LG: I want to build a wood-burning oven on the patio next to the kitchen, where as well as pizzas we could also cook suckling pig, leg of pork, veal and lamb.

Huw Hennessy, a UK travel writer and journalist, lives in the green countryside of Devon, southwest England. The lure of Latin America has led him astray for 25 years or so, with a particular soft spot for the wildlife and the people. Check out his new book, a guide to Rio de Janeiro, published by the AA (Automobile Association)