And a Bottle of Rum: A History of the New World In Ten Cocktails

30 July 2012 by Nicholas Gill in Caribbean MEDIA - No Comments 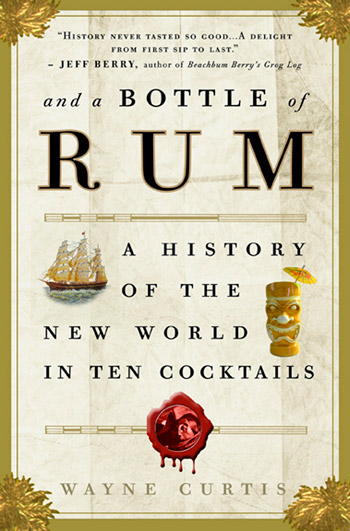 “Rum is the history of America in a glass,” says author Wayne Curtis, in the introduction of his excellent book, And a Bottle of Rum: A History of the New World in Ten Cocktails

. “It came out of the confusion of a freshly settled land, and its production became one of the dominant industries of the new economy,” writes Curtis. Through ten cocktails, Curtis explains not just the evolution of the spirit, but the development of the entire New World.

One by one, beginning with kill devil, the first crude form of rum that arose in the middle of the 17th century and was basically made from industrial waste, each cocktail traces some point in the spirits transition. There was grog, pirate swill that mixed crude rum with lime and a little bit of brown sugar. Then here was flip, a mix of stout, molasses and rum that is heated up with a smoldering iron poker and served hot. Then there’s Medford rum, which Curtis calls one of he first mass-produced products of the American colonies. Next are cocktails, like Planter’s Punch and the Daiquiri, which help to define the rum culture that would evolve into the fun, tropical beachy image that exists to this day.

The evolution of rum is often tied to historical events. For instance, after the Japanese bombed Pearl Harbor and the United States entered the war, distillers in the U.S. joined the war effort leaving liquor supplies low. This allowed the West Indian Rum industry to fill the gap. Though the rum at this time was of low quality, a widely available soft drink, Coca-cola, helped mask the taste. Special attention is also paid to Tiki culture and the rise of the mojito.

Curtis is the cocktail writer for The Atlantic, as well as other publications, and I have been following his research for some time, though I’m almost ashamed to admit that it took me more than 5 years after the release of and A bottle of Rum to pick up a copy. It was fine reading material during a trip through the rum lands of Trinidad and Guyana I took last year.

Buy And a Bottle of Rum: A History of the New World in Ten Cocktails

by Wayne Curtis by following this link.