Eating Off the Grid in Tulum 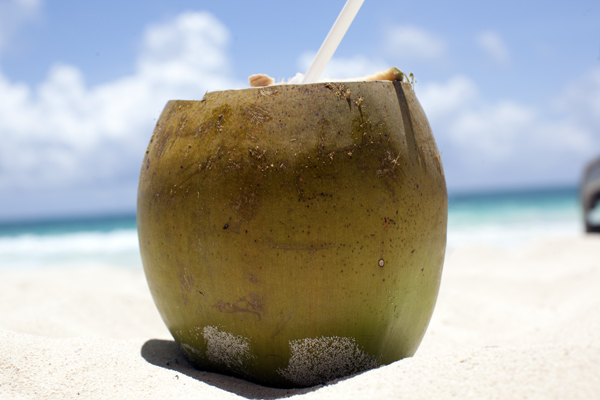 I had been to Tulum, Mexico before, but just the ruins. The beach road and its line up of eco hotels and restaurants that were literally off the power grid were on my radar. I just never made it there in various trips to the Riviera Maya. I expected that I might get a little bit lost when searching for Casa de las Olas, though I expected someone in town would have heard of it. After three passes driving past the seemingly hundred tiny hotels sitting side by side on the beach road new signs were noticed at every turn. We stopped and asked someone where Casa de Las Olas was. They didn’t know. Nor did four others. Finally someone told us it was at the end the very last property before the Sian Kaan Biosphere Reserve, unmarked, crossed by a rope and a sign that said private property. After entering, James Greenfield, aka Jimmy, the New York born owner came to greet us. We told him we couldn’t find this place. “That’s how we like it,” he said. Part of me was a little pissed off, another part was relieved that this was the kind if place Casa de Las Olas was. We were here to escape.

The five-room villa is the only hotel in Tulum that is entirely solar powered. “We want to be 100 percent sustainable and everything else is secondary,” said Greenfield. A 20,000-liter holding tank collects rainwater and biodegradable soaps and shampoos are used rather than plastic bottles. Everyone is asked to turn off the lights when you are not using them and keep showers light, though in five days there was never a cold shower or need for more electricity. Tall palms provided shade and a steady ocean breeze kept the heat from becoming unbearable during the day, while a small fan was sufficient to keep cool while sleeping.

Greenfield also turned out to be the go to source in Tulum for local fare. He drew everyone staying at Casa de las Olas a map listing taquerias, juice stands, and his local haunts that he has picked up on over the years. On our first morning we tagged along as he guided a few other guests for cochinita pibil tacos in Tulum town at a divey Mayan spot called Taqueria El Paisa. “They bring their own pigs from their own farm, then bury the meat in the ground in the early morning and its ready by breakfast,” he said. There are just some pickled onions and habanero sauce, which was refreshingly not mouth burning as the removed the seeds and veins. The tacos were ten pesos each. Afterwards we made stops for juice at Fruteria Jupiter, bread, vegetables and fruits, and to a small shop with Oaxacan cheese. For dinner everyone pitched in for skirt steak and huge jumbo shrimp – a truck from Chetumal swings by every Thursday. A few times a year Greenfield partners with Hartwood, the live fire restaurant down the road that has become something of an international sensation, for their 5-day OH! Food Workshops (limited to 12 people).

Within 24 hours of arriving at Casa de las Olas the daily routine had been figured out:
1.) Wake up and have a light breakfast, utilizing the kitchen in the room.
2.) Lay on the beach, which is perfectly turquoise and being at the end of Tulum’s beach, few pass by so it feels completely desolate.
3.) Lunch in Tulum pueblo or in one of the restaurants on the beach road.
4.) Back to the beach. Sip on a young coconut that someone from las Olas generously brings down with a straw.
5.) Buy a brigadeiro. A young Brazilian girl, who spoke no Spanish and little English magically appeared every afternoon selling these Brazilian bonbons made with Mexican cacao and local coconuts.
6.) Drink a paloma.
7.) Rest in a hammock.
8.) Dinner either in Tulum town or near the beach.

As for where to eat, there are plenty of options along the beach rode, though many are over priced and mediocre. There are a few special spots here, though most recommendations can be found in the town of Tulum that straddles the highway:

Antojitos La Chiapaneca: For tacos al pastor in Tulum, no one does it better than Antojitos La Chiapaneca. Just beside the Weary Traveler Hostel on the highway/Avenida Tulum, the two-room taqueria opens daily at 6pm and fills up with a variety of locals and tourists. The spit roasted pork is sliced off so it is crisp on the edges and succulent on the inside with the a slight tang of citrus from the pineapple dripping above (note: a slice of pineapple is on the tacos too). A help yourself row of molcajetes filled with spicy salsas and toppings sits in the middle of the restaurant. Greenfield says it might be the best in the state. Avenida Tulum.

Taqueria El Paisa: These cochinita pibil tacos are sold for breakfast only, or until this Mayan style pork is sold old out (6am-5pm). It’s not on the main drag, but a few blocks off, so few know about it. There are also tortas, relleno negro, and escabeche. The corner of avenidas Orion & Sol.

CETLI: Oaxacan and Poblano dishes created with all of the right ingredients. When Grennfield suggested adding the chef/owner Claudia to be a part of the OH! food workshop Eric Werner from the Hartwood said she was the only woman in the state that he would consider. Great care is taken to make the dishes as authentic as possible. During Dia de los Muertos they go all out. They bottle their own moles that make a great gift/souvenir to bring back home. The corner of Calle Polar & Orion Norte, T 52-984-108-0681.

El Camello: For seafood, El Camello at the end of the main drag is the place. You’ll see it by the plastic red Coca Cola tables spilling out in the sidewalk. They have fish fried whole that cost a third of the spots on the beach and taste better anyway. There are also great coconut shrimp and huge plates of ceviche and cockteles. Avenida Tulum & Luna Sur.

Hartwood: If you are only eating at one restaurant in Tulum, it should be Hartwood. Utilizing cooking with fire and no electricity, this open-air restaurant on the jungle side road is where New York trained chef Eric Werner pairs fresh fruit cocktails (many with mezcal) with locally sourced produce (chaya, nopal, jicama) and fish for brilliant plates like agave glazed pork ribs and grilled octopus. Dinner starts at 6pm and fills up quickly. During peak season the wait can be hours long. Read our full review of Hartwood here. Boca Paila Road Kilometer 7.6, www.hartwoodtulum.com.

Casa Jaguar: A sort of Lost World vibe with thatched roofs and bamboo beams with hanging lanterns, Casa Jaguar is one of the few restaurants in Tulum open for breakfast, lunch, and dinner. Local ingredients are served with touches of Southeast Asia and the Mediterranean. Whole fish wrapped in hoja santa and cooked in a wood burning oven is the star dish. Fresh juice cocktails are much like those at Hartwood. Boca Paila Road Kilometer 7.2.

Simple: Richy Zapata, a known Mexico City chef recently opened this seafood centric spot with its own pool. There’s a glass case filled with whatever is fresh, which are mostly imported from the Pacific coast (Kumamoto oysters, bluefin tuna, mussels from Baja). Pick your fish and you can have it grilled, as ceviche, as tiradito, or a handful of other preparations. Decent margaritas too.
Boca Paila Road Kilometer 8.3, www.simpletulum.com.