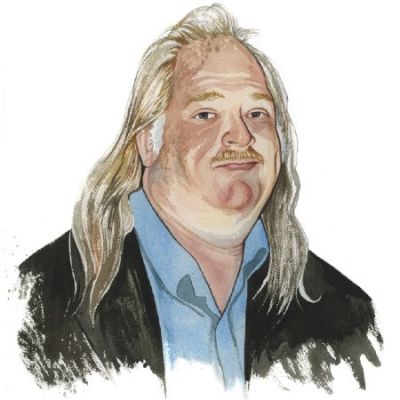 Apart from A-Frame’s incredible Peruvian beer can chicken, I haven’t really had the chance to explore L.A’s Peruvian restaurant scene (though fully intend to). So, I’m letting LA Weekly’s James Beard Award winning restaurant critic Jonathan Gold do it for me. He’s one of my favorite restaurant critics and going through some of his reviews of Peruvian restaurants I think his understanding of the cuisine quite good. Here what he has to say about L.A.’s Peruvian dining scene in his reviews with the weekly paper: 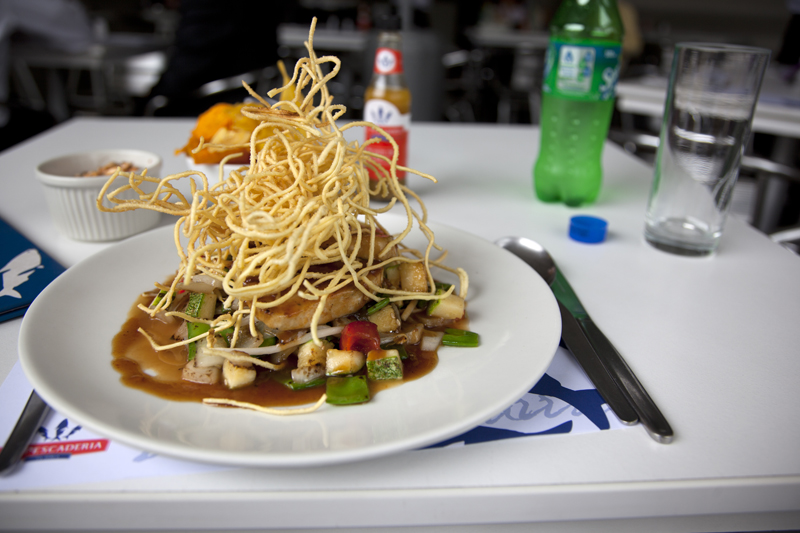 Ceviche, or cebiche as it is better known in Lima, is Peru’s national dish and an iconic symbol of Peru. While preparations vary across regions, Lima has without a doubt the most to offer. Again and again I am asked what my favorite restaurant for cebiche is. I don’t have a straight answer. My lust for raw fish marinated in limejuice is changing all the time, not to mention more cevicherias are opening all the time. Here are my 13 favorites.

There are tens of thousands of chifas, the local name for a Chinese restaurant, in Peru. They are found on almost every street corner in Lima and even in remote communities in the Amazon rainforest. They are overwhelmingly simple and generally inexpensive. They are far less fusion than most Peruvians think. While their influence on mainstream Peruvian cuisine is clearly evident (see Lomo Saltado), most chifas serve what is for the most part standard Cantonese cuisine. While there are a few chifas in Lima that serve dim sum and are a bit more upscale than normal, no major chef has attempted to neither reinvent nor modernize this variation of Peruvian food. Nikkei dishes yes, the chifa never.

A Pacific scented wind blows off the Miraflores malécon outside of the Miraflores Park hotel, where the restaurant Mesa 18 can be found. Lima has lacked a really good hotel restaurant for some time. There’s Perroquet??? in the Country Club, which is more about socialites mingling than the food, and the Sonesta El Olivar used to hire promising chefs but jumped off that train long ago. Orient Express, which manages the Miraflores Park, chose to make the restaurant a destination unto itself, rather than make it another hotel eatery like the predecessor. Gone is the stiff red and gold décor and formal setting. In came a plant filled open-air terrace and an edgy dining room designed by a Jordi Puig. 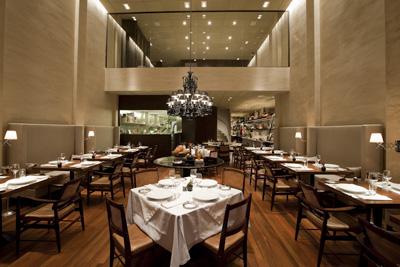 Last year after eating at Alex Atala’s D.O.M. in São Paulo I predicted that the restaurant, then #18 on San Pellegrino’s World’s Best List, would make the Top 5 in 2011. I was close. It jumped up 11 spots to #7. Thus far, no other restaurant in South America has come close to the level of D.O.M. Atala is sourcing many rare ingredients direct from farmers and artisanal vendors throughout Brazil, including the Amazon, and presenting them in a modern form. Atala isn’t focusing on foraging like at Noma or molecular gastronomy like at El Bulli. Rather he is showcasing some of the most vibrant, exciting, and unknown ingredients in a new way. Two other Brazilian restaurants, Mani (#74) and Fasano (#59), both which focus on Brazilian ingredients, also made the list.

Besides the Pisco Sour, Algarobbina, and Chilcano, the El Capitán (the Captain) is one of the most common Pisco based cocktails you will find in Peru. There is no exact date that the cocktail can be traced back to in Peru, though it was likely created by Italian immigrants in Lima with the arrival of vermouth (Cinzano Rosso) in 1854. The name, as the legend goes, is derived from military captains who rode on horseback in the altiplano near Puno and asked for a drink of pisco mixed with vermouth. Basically, the El Capitán is the Pisco version of a Manhattan.

Ají de Gallina is one of the first Peruvian recipes that picky North American eaters fall in love with. To put it simply, it is shredded chicken served in a mildly spicy, nutty sauce with a side of white rice. The dish’s origins date back to the Vice Royalty, around the time of the French Revolution. Some historians have stated that French chefs who lost their positions as private chefs with aristocratic families in France during the revolution traveled to the new world to work for wealthy criollo families in newly rich Lima and helped develop Ají de Gallina using the local ingredients they encountered. Apart from oral legend there’s no actual record of this occurring, though the story sounds nice and plausible. Today the dish is one of the most widely served in the country. 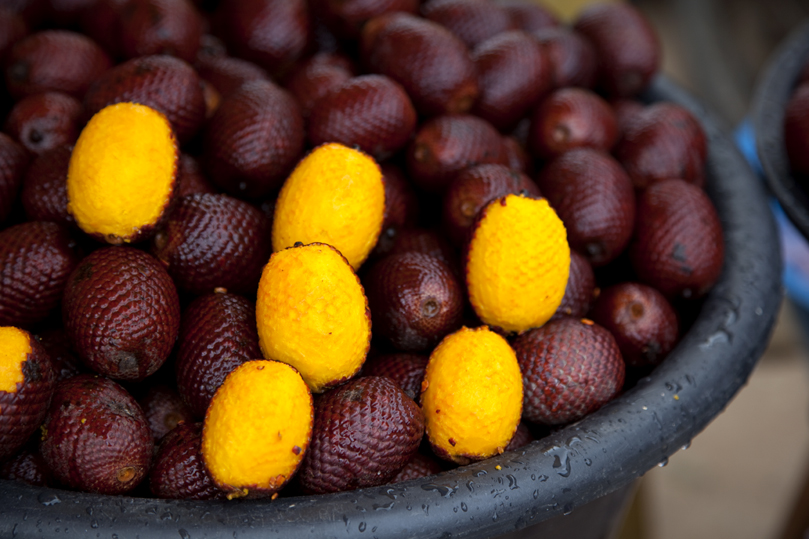 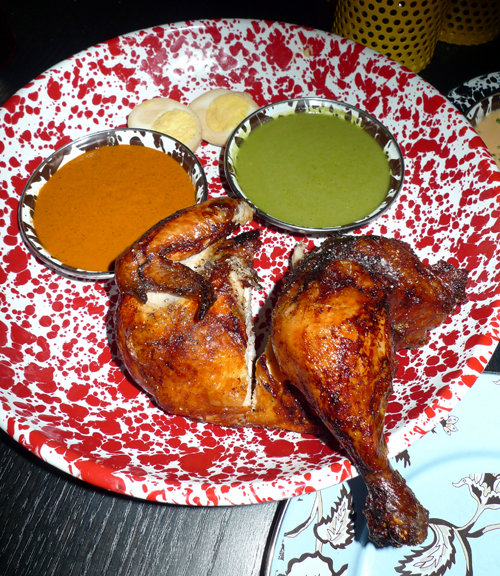 The best Peruvian style chicken I’ve ever eaten isn’t from Peru. It’s from a Korean-american team in Los Angeles lead by Roy Choi, best known for their creation of the Korean taco and helping jumpstart the gourmet food truck craze in the United States. They call it “Cracklin Beer Can Chicken,” and it’s served Peruvian-style, with century egg, salsa roja, salsa verde.” 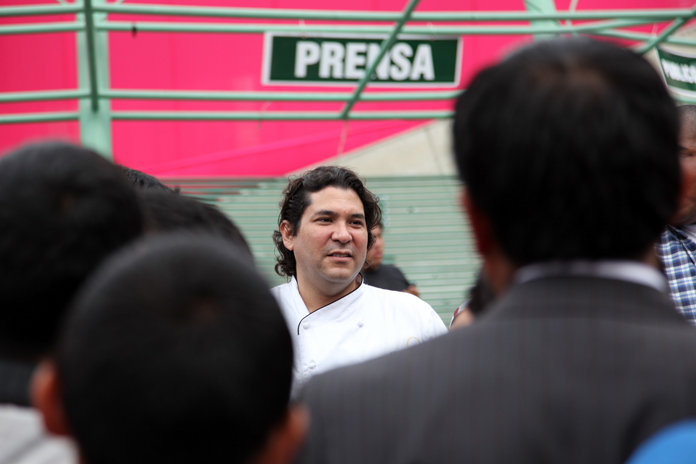 Gastón Acurio is Peru’s most famous chef and arguably the best-known Peruvian in the world. The son of a senator, Acurio went to study law in Madrid, Spain, but had a change of heart and went to Paris to Le Cordon Bleu culinary school. His first restaurant, Astrid y Gaston, was an instant success in Lima and it soon spurred satellite restaurants around Latin America and other chains based on the various types of Peruvian cuisine. The growth in popularity of Peruvian cuisine around the world in the past decade would not have been possible without him. Here is a list of Acurio’s vast restaurant empire around the world: