09 December 2009 by Nicholas Gill in Ecuador GUIDES - No Comments

Guayaquil, Ecuador’s largest city, is the center of the country’s seafood industry and much of the exported seafood passes through the city from the coast and mangrove forests. Good, cheap seafood is not difficult to find here. The Cangrejada, or crab house, is the Guayaquil equivalent of a Limeñean cebicheria and the ideal place to sample the regions specialties.

The city is rapidly modernizing and gentrifying its downtown area in attempts to lure business travelers and tourists who have come for trips to the Galapagos to stick around for a few days, but you can still find dozens of open air crab houses here and more traditional ones in the surrounding suburbs. While prawns, Tilapia, Red tuna, and other Ecuadorian seafood specialties feature prominently on every cangrejadas menu, cangreja, or crab, is the most common order. Crabs are served in a pot in the middle of the table and every diner has a set of utensils in front of them. Every gets a thick slab and a hammer that you use to crack open the shell right on your table. In some cangrejadas crabs are sold by weight, though the majority serve a standard size. At the end of a meal there is a massive pile of greasy red legs that is looks almost absurd. It is beautifully unsophisticated and a very Guayaquil thing to do, though it’s not something that is ever mentioned in guides or glossies. 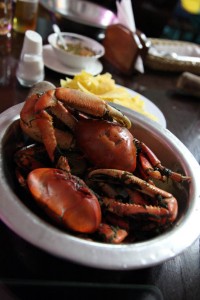 New in 2009 was an annual ban on capturing and serving crab from mid-August to mid-September, (it is a molting period when a chemical that can cause intestinal infections is released). Note: some Cangrejadas still serve frozen crab during the ban (allowed), though after three days out of water the crabs tend to lose their flavor and consistency so most turn towards other seafood (octopus, squid, shrimp, etc) and post signs saying “Off season: No crabs.”

The 50 Best Books About South America