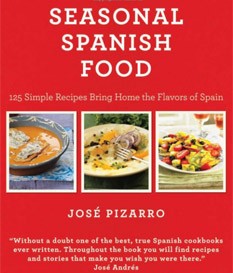 isn’t directly about Latin American food, it does have immediate relevance – and no, it has nothing to do with the author’s last name being Pizarro (no relation to the conquistador). In Latin America, particularly South America where temperature changes are more prevalent than further north, food is highly seasonal and cooking styles are heavily influenced by Spain. Often they vary little from the motherland. Many of the recipes in this book are only an ethnic group or aji pepper away from a New World variation.

Author Jose Pizarro was, until recently, the head chef of three Tapas Brindisa in London, though he trained originally in Madrid and Cáceres, Spain. He was also a contributor to the famous book of Spanish cooking, 1080 Recipes

. The forward was written by Elena Arzak of the New Basque Restaurante Arzak in San Sebastián. Seasonal Spanish Food brings 125 recipes are separated by the ingredients that are in season during each of the Spanish Spring, Summer, Autumn, and Winter. There are some real gems in the book: Spring’s Deep Fried Goat Cheese with Orange Blossom Honey, Summer’s Baked Brown Trout with Bacon and Herb Salad, and Winter’s Escabeche (you thought it was Peruvian, didn’t you?).

Of course there is plenty about Tapas too, given the author’s history at Brindisa. His advice: “Don’t spend two days preparing loads of different dishes. Buy the best quality Ibérico Ham and charcuterie; cheeses – cut to order – not pre-sliced and wrapped in plastic; and then choose a couple of dishes that can be made in advance.” 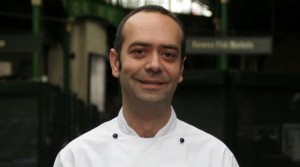 There’s a wealth of info Spanish mushroom hunting and recipes: Porcini with Shrimp and Serrano Ham, Mushroom and Chestnut Soup, etc. The author gives a nice bit of insight to his earliest experiences with food and cooking, as well as his history and first tastes of certain dishes that really help paint an image of the landscape. Extra detail is given to holidays such as Easter and ingredients such as Spanish Vinegar, Olive Oil, and Marinated Anchovies. He doesn’t shy away from pig’s ears and offals, but the majority of the recipes are presented uncomplicated. José Andrés has called it “Without a doubt one of the best, true Spanish cookbooks ever written.”

Photography: Emma Lee’s photography in the book is excellent. The images are location based and rarely seem as if they were shot in a studio.