Trekking & Walking Routes in Peru’s Sacred Valley of the Incas 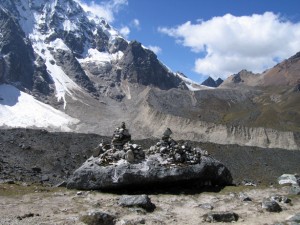 Route marker on the Salkantay Trail to Machu Picchu.

The number of hikes available from Cuzco, Peru and elsewhere in the Sacred Valley of the Incas is baffling for anyone new to the scene. The crowds and high prices of the traditional Inca Trail have spurred the growing number of tourists that come tho the Andean city to look elsewhere to an array of alternatives, many of which are superior.

4-day Inca Trail to Machu Picchu
The 4-day Inca Trail begins in Qorihuayrachina, aka kilometer 88 of the Ollantaytambo-Aguas Calientes railroad, from where you will hike for four days to the ruins of Machu Picchu. You will stay in tents at campsites and need to book months in advance in order to secure one of the limited permits. There will literally be hundreds of others with you at every campsite and you will at times stand in line to walk up the stone steps or get a decent photo. The trail is this busy for a reason though. The 4-day trail is magnificent. It covers stone roads used by the Incas and stops periodically at well preserved ruins. The views of the Andes are stunning and the trip is one to remember. The last walk, in the moments before sunrise on a narrow set of vertical stairs and path that lead to the Intipunku, or Sun Gate, you will see the ruins of Machu Picchu in its most majestic form.

2-day Inca Trail to Machu Picchu
The 4-day Inca trail but cut in half. Instead of walking from kilometer 88 of the Ollantaytambo-Aguas Calientes railroad, you will begin at kilometer 104.

Salkantay Trek
The 4-5 day Salkantay trek is the nature lovers trek. The well trodden trail climbs from the Andean town of Mollepata (in most instances) and under the shadow of the 6,271 meter mountain of Salkantay, a route that is occasionally blanketed in snow. From Salkantay the trail drops downhill into the cloud forests where you will meet with a rail line that will take you to Aguas Caliente to see the ruins of Machu Picchu the next day. In 2007, a new lodge to lodge trek from Mountain Lodges of Peru began being offered along this route that gives hikers the option to stay in comfortable lodges with hot showers and gourmet meals at the end of each day. Most still camp, however.

Choquequirao
Choquequirao was considered to be the sister city of Machu Picchu and is another of one of Peru’s great archeological sites. Set in an equally majestic setting above the Apurimac River and surrounded by Snow capped Andean peaks. The stone work here is just as brilliant as that at Machu Picchu, if not better. Plus, you’ll probably have the place to yourself. The five day trek is considerably more difficult than the Inca Trail.

Lares Valley Trek
This four day trek is equally as difficult as the Inca Trail, but much less spoiled. If you want to see real and isolated Andean life, with herds of llamas and alpacas, stone walls and thatched houses, and people in traditional dress than this trail is your best bet. It doesn’t end at Machu Picchu, but it is a unique experience that no one regrets.

Ausangate Trek
The Ausangate trek takes you through the high altitude (above 6,000 meter) Cordillera Vilcanota. The seven day circuit begins and ends in Tinqui, a small Andean Village. You will cross four high passes, visit glaciers, and circle the Ausangate massif. Acclimatization in Cusco is essential for this trek. This is the most difficult trek in the Sacred Valley. If you can arrange the trek during the May/June indigenous festival of Qoyllur Rit’i Festival, or the Snow Star Festival, the largest gatherings of its kind in the world.

Vilcabamba Trek
Vilcabamba, aka Espiritu Pampa, is the last Inca city and what Hiram Bingham was looking for and thought he found when he discovered Machu Picchu. The town was considered the last hideout of the Incas and from where they launched their guerilla war against the Spanish for decades after conquest. This cloud forest trek begins and ends in the town of Huancalle, near Quillabamba. The trek lasts anywhere from 6-10 days depending on your guide.

The 13 Best Cevicherias of Lima, Peru