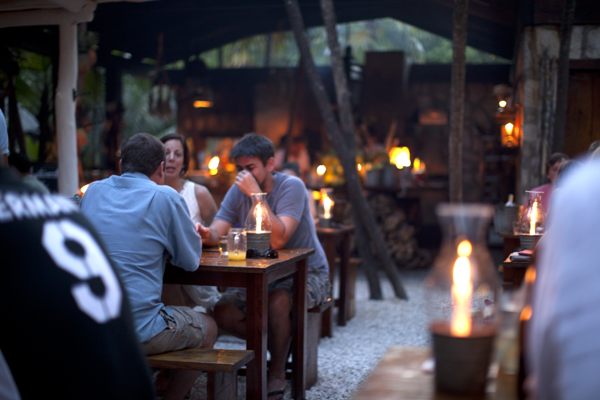 Cooking with fire is the oldest form of cooking. Cave people did it. At the end of 2012 I found my self in Stockholm, Sweden at Niklas Ekstedt’s newly Michelin starred restaurant Ekstedt. Rather than focusing attention entirely on Nordic ingredients like every other of the moment restaurant in Scandinavia, Ekstedt focuses on traditional Nordic cooking techniques, which are primarily cooking and smoking with open fires and wood ovens, completely without electricity, in one of the most unique and sophisticated kitchens I’ve ever seen. Around the same time I bought Todd Selby’s beautiful food book Edible Selby

, of which features the chef of Tulum, Mexico’s Hartwood, Eric Werner on the cover. Both restaurants, in completely different ways and dramatically different settings, are both practitioners of live fire. The book has sat on my desk for months so this image of wood burning ovens in the Yucatan jungle has been in my thoughts regularly, perhaps driving my decision to vacation in Tulum last week.

One of the highest forms of praise of a restaurant, at least in my mind, is when it is a reflection of the place it is in. Tulum, at least the beach area, is off the grid. New Yorkers Eric Werner and partner Mya Henry visited Tulum in 2010 and by the end of the year had come back, bought a piece of land, and opened Hartwood. Werner, who can be seen taming the flames, previously worked at Vinegar Hill House in Brooklyn and Peasant in Manhattan, both known for live fire cooking. It was ideal training for cooking in Tulum.

except what is provided by solar or generators, so. Like Ekstedt, Hartwood doesn’t use it. They use a wood burning oven and a grill in a large open kitchen that takes up about one third of the restaurant space. I went to Hartwood almost immediately after dropping off my bags. Apparently the wait can reach three hours during the high season, though we snuck in around 7pm just before a waiting list began to form. It’s on the jungle side of the beach road, so the open-air dining room is literally surrounded by green. A small cane roof bar hut with cocktails that mix fresh juices like grapefruit and pineapples with mezcal and tequila, as well as hibiscus and habanero, stands to one side.

Produce comes from the Mercado Municipal in Valladolid, a 90-minute drive across the Yucatan peninsula and community farms, but the result is worth it for the superb quality of Chaya, nopal, jicama, and other vegetables they use. Seafood comes straight from the ocean and is never more than a few hours old. Fresh seasonal dishes with bold beautiful flavors in dishes like agave glazed pork ribs, grilled octopus, and grilled watermelon salad with queso fresco. There’s little that’s traditionally Mexican or traditionally anything really. It’s ingredients that matter. Cooked simply. Yet Hartwood brings out the flavors of the Yucatan as well, if not better, than any other.

The Food of Brazil’s Botanique