I was recently given a sneak peak at Solbeso, a spirit being distilled from fair trade fresh Peruvian cacao fruit. It’s the first spirit of its kind. It’s not a chocolate liqueur, but a clear spirit with a consistency like that of pisco. It is said to have the same the chemical benefits of dark chocolate, yet none of the sweetness or flavor. On tasting it, I smelled chocolate notes immediately as soon as I brought the glass to my nose.

Sure Quito is home to 500-year-old church or two, though most don’t realize it’s also one of the centers of the world’s chocolate industry. Ecuador’s Arriba Nacional cacao bean is the most sought after the world over and Quito chocolate shops, cafes, and activities have become a point of reference for chocolate lovers:

The indigenous Kiwicha farmer’s coop, Kallari, that completely runs and operates their own single origin artisanal chocolate company has had a small shop and lounge at Wilson and Juan Mera in the heart of Quito’s Mariscal for several years. Traditionally you could have a cup of coffee or pick up a few bars of chocolate, fair trade coffee, vanilla beans, or handicrafts designed in the indigenous village that the chocolate comes from. On a recent visit I noticed it was turning into a full blown Amazonian café with Wi-fi. 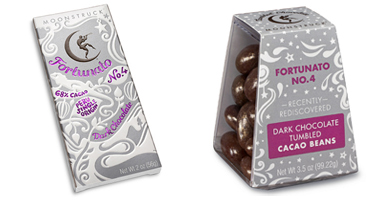 The Pure Nacional cacao bean, supposedly indigenous to Ecuador and wiped out due to disease a century ago, and was apparently rediscovered recently in northern Peru’s Maranon Canyon. As TastingTable clearly shows and the New York Times reports, American chocolatier Moonstruck has already released a Pure Nacional single origin chocolate bar (68% cacao), called Fortunato No. 4, as well as chocolate covered beans.

Ecuador’s Arriba and Cacao Nacional cacao beans are considered some of the finest in the world and international chocolatier’s have long recognized their superiority. Only recently however, have artisanal labels sprung up from within the South American nation, much of it organic, fair trade, and of superior quality than has ever been produced before.

Gourmet supermarket in Dean& Deluca in NYC has begun selling upmarket chocolate bars from a slew of Latin American countries as well as other destinations. About half of these Origin bars focus on Latin American nations. Each areÂ single estate chocolates and have the following percentages of cocoa: Costa Rica… Read More →