Vater Otto might be the epicenter of the least Peruvian seeming city in Peru. The patrons at the one room, wood cabin looking pub on a corner of Oxapampa’s Tyrolean seeming main plaza appear Peruvian at first glance, but they’re friendlier. The bartender remembered me from the night before and greeted me by shaking my hand. A few bar stools were on the sidewalk beside an open window and passerby’s would lean in and say hello to a group of regulars in a corner near the bar. A few had blue eyes and blond hair and they spoke with a funny twang. They sang German drinking songs and clanked their glasses together. When one leaves they tell me goodnight. Another asks me where I’m from and that I should have come and chatted with them. They were cheerful and laid back, while the people in rest of Peru, in comparison, can seem so intense and formal.

So how did a Austrian-German village appear in the Peruvian jungle? In March 1857 a group of 300 Tyrolean and Prussian settlers, lured by a contract with the Peruvian government that hoped to bring as many as 10,000 colonists to the unsettled area of the Alto Huallaga, boarded the ship “Norton” to Peru and two years later settled the town of Pozuzo, an even more remote and more typical village than Oxampampa. In 1891, as the settlement flourished, colonists from Pozuzo established Oxapampa, as well as Villarica, an important coffee growing region today (it is where Starbuck’s gets their Peruvian coffee from).

I had heard of Oxapampa before, but didn’t know much about it. When artisanal cheeses from the region began appearing on menus of Lima restaurants and in Wong supermarkets, among the French and Swiss gourmet section and not with the mass-produced Andean varieties, I became intrigued. Oxapampa is quite remote – an eight hour car ride from Lima that’s even longer by bus. The route rises over the desert coast and passes over a the 4,818 meter pass of Anticona (Ticlio) in the high Andes before dropping down to the lush central jungle at La Merced and back up a death defying road to a high jungle valley where the town sits. It’s this variety of climates that have given the region such impressive biodiversity, which UNESCO confirmed by naming the Oxapampa-Asháninka-Yanesha reserve a world biosphere, one of 564 in the entire world. 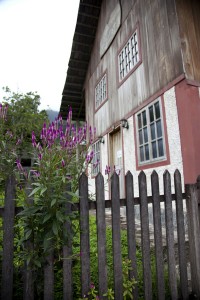 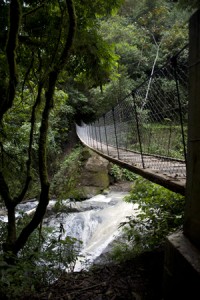 My trip was quite sporadic and lacked planning. After a canceled river expedition in the Amazon, I set off immediately into the Central jungle. There was a slow bus to La Merced from Lima and a bastard of a mini bus direct to Oxapampa, a trip that I learned on the return takes half the time, though three times the cost, by taking a series of collectivo taxis (Oxapampa>La Merced>Tarma>Lima). Oxapampa is barely noted in guidebooks and few Peruvians I know have been there, so I didn’t have much to go on. On arrival I walked in the direction of the main plaza and stopped into the first hotel I came across. They had a room, clean with an inside facing window, for 20 soles (about $7). There are a few better hotels I learned, like the Cabañas El Trapiche and Posada Edelweiss, which top out around $60 a night.

As cheese tasting was my original objective, I set out immediately. Oxapampa’s cheese comes from one producer, Floralp, which wasn’t as artisanal as I thought, though it’s still a relatively small-scale operation. I found a tour hut in an alley behind the wooden Igleisa de Santa Rosa, where the attendant was carving a bird out of a tree branch. He wasn’t overly concerned with selling me a tour, as there was a minimum of two people needed, but told me how to get to Floralp. A moto taxi could take me until a bridge and from there I would have to walk another 20 minutes or so.

There wasn’t much of a visitor center at the factory, just a second level room with most of the cheeses laid out for sampling, which looked out over the factory floor. Their groundbreaking cheese is their Camembert, which is proudly being used in restaurants dishes around Peru now, though their Brie, Tilsit, Belpaese, and Oxandino (mild, semi-soft) are all quite pleasant without being overwhelmingly unique. The one I fell in love with was the Camboxola, a strong bleu/camembert cross they created and only sell in at the factory. It looks a bit like Humboldt Fog, a goat cheese I like from California, though it’s really just a very creamy, rather pungent blue cheese.

On leaving Floralp I asked how far was the walk to Chontabamba, a neighborhood of Oxapampa that makes a weird rural tourism circuit. I was told twenty minutes, but it took an hour and a half of walking past humid granadilla orchids and cow pastures, occasionally seeing a brightly colored orchid growing out of a fence post. In Chontabamba I toured a trout farm and the Huarapo, a place where they distill sugarcane juice into a drink of the same name, which is really just aguardiente, or fire water.

The following day I made my way by minibus to the Oxapampa-Asháninka-Yanesha Biosphere Reserve. Someone in town recommend hiring I might be able to find a guide where the minibuses set off.His name was Elvis, which might be the most common name for a tour guide in Peru. He runs guided trips when he can, though most of the time does odd jobs around town.We pass a dwarf in the road. He points. “Enano,” and laughs. While mean spirited, something was so innocent about his excitement. That was Elvis.

The road was a mess. Muddy, hanging onto the cliff and at certain portions, rivers and streams ran right over it and washed much of it away.We had to get out, tires had to be changed, piles of earth and rocks had to be moved.The road descended. The heat grew more intense. The flora became lusher, more tropical.The main access point to the reserve is just off the road. There’s a small ranger station, with camping sites nearby. The Pozuzo River rushes below. I heard of Spectacled Bears in the area, but they are higher up in the mountain the ranger said. The monkeys only appear in the early morning too. The Andean Cock of the Rock, however, could easily be spotted. Elvis and I began exploring the few short trails near the entrance. Within a few minutes we spotted the male cock of the rock in a tree beside a small metal bridge. A half hour later we saw another. Then a female. Some birders spend weeks looking for one. Here they were everywhere. A few hours later we chatted with the rangers. They showed us the visitor center, sort of, they were developing. There was a topical map where I could see just how large the new reserve was and the places I one day wanted to go. Away from the road and over a few mountains, there is terrain even more pristine that encompasses dozens of microclimates. From the frontier, far away from where I stood, a boat could be hired and expeditions lunched, though few ever have been. Weeks and months could be spent without seeing another soul. Next time.

The minibus was long gone so we began walking until we could flag down the next passing vehicle to Pozuzo. One picked us up an hour later. A downpour began. It lasted twenty minutes and stung my skin. The sun came back out and I was dry just as quickly.

Pozuzo retains even more German character. The people are blonder. Their dialect is stronger. The architecture hasn’t been as corrupted by cheap, concrete. Wood is everywhere. The town is more compact. Just one main street with a couple of churches and a plaza. The Pozuzo River forms one border. Steep green hills rise up all around it. A jungle paradise and no one knows its there.

What to Pack for a Trip to Peru