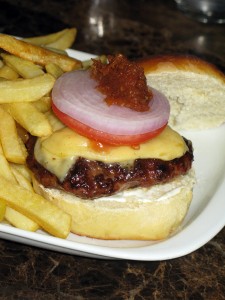 At Cafe Clock in the Fes Morocco medina, the ancient, maze like walled part of the city, British restauranteur Mike Richardson has discovered what he calls the perfect meat for burgers: camel. I tried the burger recently and surprisingly, it was excellent. Served with purple onion, tomato, a slice of Swiss cheese, and a spicy Taza ketchup sauce it passes for a typical burger in a New York diner. The taste of the camel isn’t strong, but rather mild and mine was rather juicy.

With Shepards Pie, cheesecake, cappuccino, Moroccan style tapas, a book exchange and library in a 250 year old building, Cafe Clock is the best hangout within the medina. If you are there it is worth checking out.