Rubber trees grow wild in the Amazon rainforest and at the beginning of the automobile industry the world’s rubber trade was completely reliant on the Amazon jungle. Rubber tappers, mostly indigenous families who were widely exploited, gathered rubber from vast reserves near large Amazonian cities such as Iquitos, Manaus, and Santarem. The trade brought considerable wealth to the region and the rubber barrons lived like royalty in these cities, importing Azulejo tiles and even gourmet foods from Europe. One rubber barron famously claimed to have his laundry sent to France. The boom didn’t last though. As more and more rubber became collected, tappers had to move farther and farther away from cities to the point that it became more and more expensive to produce. All it took was a British man to steal a few seedlings and set up orderly plantations in Malaysia to completely wipe out the Amazon’s rubber industry in a matter of a few years.

When Henry Ford gets word that the British would soon have a monopoly on the rubber trade and prices could rises drastically, he begins to look into setting up a rubber plantation like those in Malaysia in the Amazon, where rubber trees were originally from. In the experiment his desire is not only to collect rubber to make the United States self-sufficient, but also to import the American way of life into one of the most harsh environments on earth that few non-natives have ever learned to adapt to.

The town, named Fordlandia, would have American style streets, proper health care, electricity, and be as modern as any in the United States. He would bring scientists, city planners, botanists, doctors, and dentists. It would be a model city for Brazil and the Brazilian government actively sought and encouraged Ford to come via tax incentives and cheap land. Ford didn’t however; bring anyone with any knowledge of the Amazon. 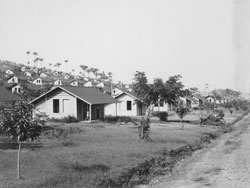 The first years of the experiment were disastrous. There was rioting, exploitation of workers, people living in squalor and disease. The first crops failed and had to be replanted. It took years of mostly disorganization and millions of dollars, supplies, and labor direct from Detroit to get the rubber plantation to produce a minimal amount of rubber. Yet when the British monopoly never came to fruition and rubber became as cheap as ever, the experiment collapsed. Henry Ford himself, though he does promise, never comes in person to see Fordlandia. In the end Brazil buys back the land and Fordlandia, still a village today, shifts its focus to other crops.

Anything you ever wanted to know about Henry Ford and the Ford Motor Company’s experiment in the Amazon is here in Fordlandia: The Rise and Fall of Henry Ford’s Forgotten Jungle City

. The author, Greg Grandin, tells the stories of the men and women who braved the wilderness to set up this plantation He goes to great lengths to provide the statistics of the money involved and a thorough timeline of every single event in Fordlandia’s history and how the plantation came to be. Fordlandia is as much a story of Henry Ford as Fordlandia, as their paths tend to parallel each other. Well worth a read.

The History of the Piña Colada