The Food of Brooklyn Flea

If you want to capture some sense of what Brooklyn is or what Brooklyn is becoming, the Brooklyn Flea Market is a good place to start.  The Brooklyn Flea is now the largest outdoor market in the city with about 200 vendors set up every weekend. While antiques and handicrafts are the main focus of the market, the dozens of food vendors lure me on their own. They’re reason enough to come and hang around and ponder over this weird sponge that Brooklyn has become. I consider the borough the foodiest place in America. There is more going on here than one would expect: organic rooftop farms, farmer’s markets, distilleries, indie bakeshops, Bacon Marmalade, sustainable butchers, Kombucha making classes, and of course Red Hook Soccer Tacos. New gastronomic ideas are being created every day in Brooklyn and the Flea is ground zero.

On Saturday’s the flea is in Fort Greene at 176 Lafayette (corner with Vanderbilt), while Sundays are indoors at One Hanson (at Flatbush) in Fort Greene. This season 25 food vendors will be on the scene: 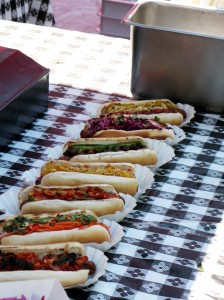 Asia Dog (www.asiadognyc.com)
Asian Hot Dogs. Do I need to say more? There’s a Vietnamese Banh-Mi style dog, one with Kimchee and Seaweed flakes, and one with Chinese BBQ pork belly and onion (plus a Korean BBQ Bulgogi Burger). Dogs come in Beef, Organic Beef, Chicken, and Veggie. The popularity of the stand has allowed Asiadog owners to seek out a permanent storefront downtown.

Red Hook Lobster Pound (http://redhooklobsterpound.com)
When the Lobster pound first burst on the scene in 2009 there was a long wait at their stand. Their lobster rolls are my fav, though I’ve heard the whoopee pies aren’t bad either. This year they’ll be steaming whole lobsters to eat on the spot or take home.

Pizza Moto (www.pizzamotobklyn.com)
A portable wood fired brick oven is the secret to this mobile pizza shop that turns up at the flea, as is the sourdough starter made from the wild yeast found on local apples. Pies are small, Neapolitan style.

Salvatore Bklyn Ricotta (www.salvatorebklyn.com)
Fresh whole milk Ricotta and Smoked Ricotta…how awesome is it to find that at a flea market?

Kumquat Cupcakery (www.kumquatcupcakery.com)
Cupcakes are the new Macaroons…or is it the other way around? Regardless, Kumquat’s fine flavors like Maple Bacon, Coffee Caramel Bourbon, P.B. Banana Honey, and Lemon & Lavender are some of the more interesting in town.